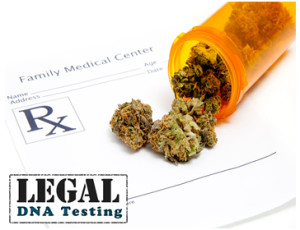 Medical Marijuana has brought about a new debate regarding its merits or lack thereof: whether or not a parent with a prescription for it is fit to keep his or her child.

The issue was raised in a recent story by CNN regarding Aaron, a Napa, California father that was taken away in handcuffs in front of his girlfriend Shawnee and infant son after police searched his home and found proof of medical marijuana use.  The CNN article did not use Aaron and Shawnee’s last names or the name of their son due to the pending child protection case.  According to CNN:

“What brought police officers to their home in early January, they say, was an anomaly — a loud argument. The clamor was heard by a neighbor, who called the police.

When officers later entered their home to investigate, they discovered loose marijuana, cannabis oil, and marijuana cigarettes strewn on the desk in the couple’s living room. The living room smelled like marijuana. (Aaron says the smell was lingering from the couple medicating the night before, after their son fell asleep.)”

The situation brings about a bureaucratic dilemma due to the fact that for decades agencies that are charged with the task of making sure children are safe have seen marijuana use as a red flag and grounds for declaring a parent unfit.  After police took Aaron, 34, away a social worker arrived at the family’s home and decided that the baby should be placed into foster care.

The article goes on to quote Aaron as saying:

“I was pleading with them, ‘Look, you guys, I understand your perception, but we are wonderful parents, hardworking members of our community.'”

“They could not conceive of the fact that you can be a wonderful parent, a decent human being, and medicate with marijuana.”

Medical marijuana has been a taboo topic with many Americans for several years now.  At the same time, 21 states have made medical marijuana legal with Utah about to join as the 22nd state.  Colorado and Washington are both currently the only two states that have made marijuana legal as a recreational drug, but the fact that it has been made available medically by nearly half of the states in the country has made it considerably less taboo than in years past.

According to Policymic.com, the bill that was just unanimously passed by the Utah state Senate only needs to be signed by Governor Gary Herbert.  The bill has also been passed by wide margins by the Utah state House by a wide margin.  The site states; “The new bill will only restrict marijuana use to non-intoxicating cannabis oil for epileptic patients. Nicknamed “Charlee’s Law,” a 6-year-old epileptic patient who inspired the bill, the bill will clear marijuana for pediatric use as well.”

So in one state we have an infant taken away from his parents due to their legal medical marijuana use and in  another state they are making the drug legally obtainable for medical use for children with epilepsy.  How are we supposed to able to police marijuana when the lines have become so blurry as to what is acceptable and what is not?

One reason for the blurred lines is that some laws do not account for situations that are almost certain to arise.  The CNN story states;  “as the narrative of medical marijuana legalization unfolds across the country, so does a complicated parallel story of patients whose children are being removed to protective custody — or worse, permanently removed — ostensibly because of their legal marijuana use. Most medical marijuana legislation does not seem to account for this possibility.”

So essentially, in California and several other states where medical marijuana is legal it could be seen as indecent for these prescription holders to be using while they have children, but in Utah the child would be allowed to use medical marijuana if he or she was epileptic.

Medical marijuana is okay for parents to give to their children in one place given a certain medical condition, but in other places parents are seen as unfit for legally using it themselves.  There have been major gains for medical marijuana use in America, but it still seems that we as a democracy have some ground to gain in order to make everyone feel safe within our state and federal laws.